What started as an idea, grown to a dream and made into reality; I will never forget the look on his face when I told him about plans for our month long vacation.  We had joked about it before but this time it was different. This time it felt like a possibility and not just some silly idea.

We understood that if you wanted something bad enough, you had to work your ass off to make it happen. So we did just that. It took us nearly nine months to plan, prepare and save and luckily we were on the same page regarding destinations. We crossed nine states and visited twelve national parks in twenty-five days.

This is our story..

It was Labor Day morning when we set off for our first destination: Utah and the Mighty 5 National Parks. We arrived in Zion later that evening and checked in to our campsite at Watchman Campground. This would be our third time at Zion National Park and we were set to finally hike Angels Landing. Unfortunately, due to certain health complications that we ran into a few days prior, we decided to take it easy and not do the hike. It was hard to walk away from the first hike we had planned but we understood that we had an entire month of adventure ahead of us. Besides, we were stoked to finally visit our next destination, Bryce Canyon. 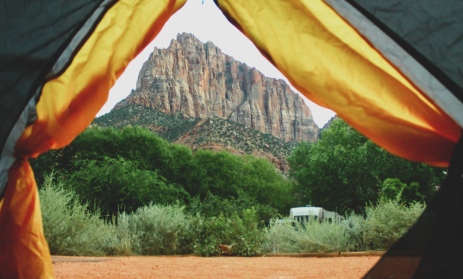 The drive from Zion to Bryce Canyon is a pretty one. The clouds were apparent but the sun shined through and made for some awesome scenery. We had an idea of the trails that we wanted to explore but was not expecting the very hot and humid heat. Our first hike in Bryce Canyon ended up being our last hike for the day.  The Queen’s Garden trail which is 1.8 miles round-trip is considered to be the easiest trail that goes below the rim. The fully exposed trail descends 320 feet below the rim and ends at the Queen’s Garden. 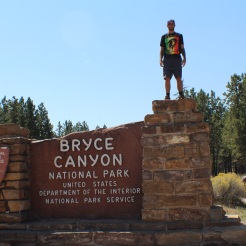 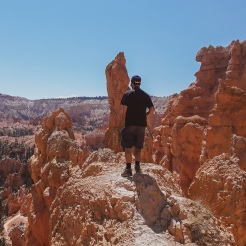 Because of the medication I had been taking, it was not a good idea to be fully exposed in such heat. We completed the Queen’s Garden trail and decided to explore Bryce Canyon a different way; by at least visiting all of the lookouts by car. After our third lookout, rain and thunder came out of nowhere. The sky was dark and cloudy making it difficult to see anything from the lookouts; so we decided that our time in Bryce Canyon was over as we needed to make way to our next destination.

We did not have any plans on where we were going to camp that night but wanted to check out Calf Creek Falls the next day. We scored an awesome site at Calf Creek Campground where we set up and chilled for the remainder of the evening. We woke up to clear blue skies and it was the perfect weather for a hike.

The Lower Calf Creek Falls trail is 5.84 miles round trip. This beautiful trail will lead you into the backcountry of Grand Staircase-Escalante. After the first mile or so you come in contact with Calf Creek and follow the trail to an amazing 130 foot waterfall known as Lower Calf Creek Falls. We ended up sleeping in that morning and got a late start. We arrived to the falls around 11 AM on Wednesday morning and to our surprise there was a few people already leaving. We wasted no time setting up our hammock and getting our feet wet. It was our third day of vacation; after spending countless hours in the car and hiking a few miles in the dreaded heat, it was nice to swim around in a waterfall. 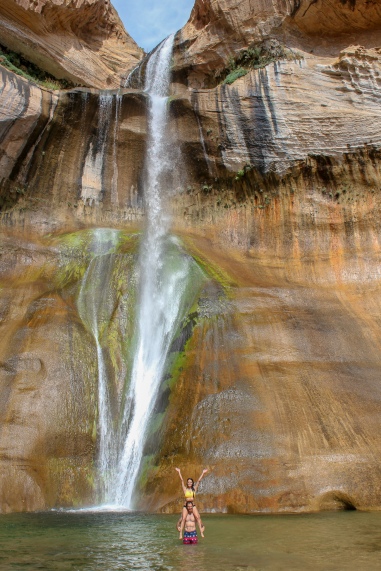 Next stop, Capitol Reef National Park. We didn’t have any plans or specific hikes that we wanted to do in Capitol Reef so it was nice to arrive with an empty schedule.  After leaving the visitor center, we learned that there is a scenic drivethat you can explore for a small fee. We decided that this would be best since we did not have much daylight left.  We drove through a couple of washes and explored a smaller trail, but we started to loose daylight fast. We were not able to spend as much time in Capitol Reef but next time we’re coming back with a 4×4! 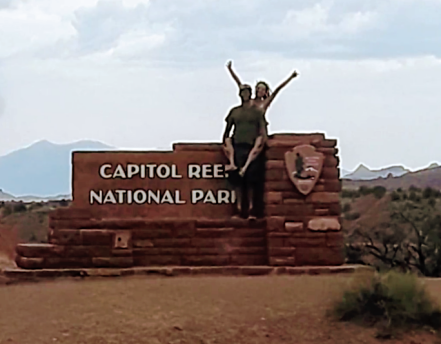 With no reservations or specific plans to camp, we left the park not knowing where we would be sleeping for the night. Then I remembered a nearby (or so I thought) state park that I wanted to visit if we had the chance, Goblin Valley. After a 2 hour drive, we arrived in Goblin Valley to only find out that there was no availability. We left the park in hopes of finding home for the night.  Well, we kind of got lost somewhere on a dirt road in the middle of Utah. Luckily, it was a full moon that night and the moon lit up the sky; we found the correct road and headed into town.

We arrived in the small town of Green River around 10 PM. As soon as we got service, we started looking for the nearest campground with availability. We learned that it would be 65 miles to our next destination, Arches National Park. By this time, we were both exhausted and just wanted to sleep. We decided that even though we were only 3 days in on our road trip, we would be sleeping in a hotel that night.

The next morning we set off to complete the Mighty 5. We had plans to camp outside of both parks near the Colorado River. But first, we find and set up camp before exploring the two national parks. Being a Friday, we understood that camping availability would be very limited and wanted to score a site before having to repeat the night before. The scenic byway of Highway 128 is absolutely breathtaking. With over five established campgrounds, we were able to score a decent site at Oak Grove campground where we would set up base camp for the next few days as we explored Arches and Canyonlands National Parks.

Of course we had to hike to the arch that is on Utah’s license plate, Delicate Arch. That was the first hike that we did when we arrived in Arches. It was a hot day and the trail is very exposed. We took our time, taking in the views and blown away when we finally reached the famous arch. We snapped some photos and headed back to explore more of the park. Arch after arch after arch, there was just so many! We were able to check out two other arches before getting dumped on and having to call it a day. Besides, the operating hours for Arches was shortened due to construction that month so we had to leave a little early either way. 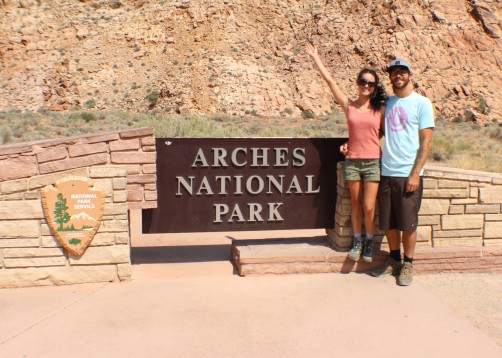 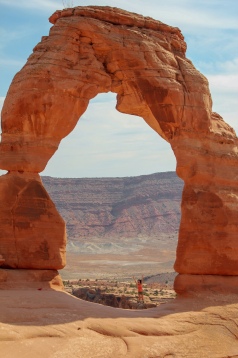 We made way back to camp and enjoyed delicious pasta next to our campfire. Original plans were to wake up early the next morning and try to catch sunrise at Mesa Arch in Canyonlands but we both knew that we would be sleeping in that morning. We arrived to Island in the Sky at Canyonlands National Park, our last national park of Utah in a week. We checked out the visitor center and did some driving around. We completed a small hike, Grand View Point and realized that we’d rather be in the Needles District. It was nice to explore Island in the Sky nonetheless, but we saw more adventure down below. 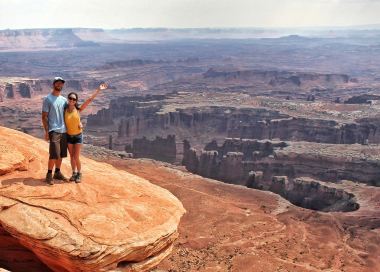 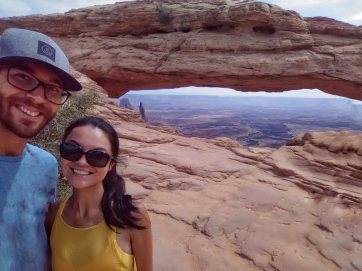 100 miles away and about a 2 hour drive later, we arrived in the Needles District. Since we lost those 2 hours of driving, we had to make up for it by hiking as much as we can before sunset. We were able to complete 3 or so smaller hikes in Canyonlands: Roadside Ruin, Pothole Point and Cave Springs. Of the three hikes, my favorite was Cave Springs.

Later that evening, we found ourselves cuddling up next to our campfire as we prepared for a chilly and rainy night. It was our last night in Utah after spending 5 days exploring the Mighty 5. Each of those days brought extreme heat and little rain, but we’re we prepared for the weather at our next destination?

One thought on “Our Epic Road Trip: Week 1- Utah and the Mighty 5”

I'm Vanessa, hiker at heart & story teller behind Forever She Wanders. I find passion in getting outdoors, exploring new places and creating new memories to share with you, in hopes to inspire you to get outdoors and follow your passion. ♡

Just imagine the impact we'd have, if we celebrated Earth Day, every day?! 🌎⁠⁠
sometimes the little things in life are more than enough 🌻⁠⁠
✌🏼😜⁠⁠
stop sitting.⁠⁠
Pay it forward, by giving back. ✨⁠
Options vs Opportunities.
Solo travel will be the scariest, most liberating, life changing experience of your life. You don't have to go far, you just have to go. ✨⁠⁠
The mind starts to wander when the feet want to roam, as if going into the backcountry was really going home. ✨ #forevershewanders⁠⁠⁠
Imagine the world we'd live in if we all took some time to leave any place we visit, just a little better than we found it. ✨⁠⁠